A History Of Psycholinguistics 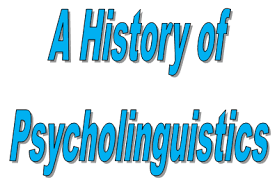 In the Formative Period, both linguistics and psychology were committed to an operationalist philosophy which derived theoretical constructs from observable data by using a set of highly explicit and verifiable operations. Structuralism was the prevailing paradigm in linguistics and defined units like the phoneme and the morpheme in terms of operational procedures. Behaviorism was predominant in psychology and also gave primacy to observable data, methodologically focussing upon rigorous experimental design and statistical analysis of data.
The Linguistic Period is characterized by the rise of transformational generative grammar in linguistics, followed by its theoretical domination of psycholinguistic research. Noam Chomsky, the originator of transformational generative grammar, successfully argued that behaviorism, structuralism, and information theory, the scientific perspectives which had oriented psycholinguistic research in the Formative Period could not provide an adequate explanation of natural language if it was based on an operationalist philosophy. He further argued that a deductive approach was required, and that linguistic theory has as its proper domain the underlying competence of speakers, and not their actual performance. By extension, psycholinguistics also took as its starting point the study of competence, with the study of performance a secondary activity. The centrality of grammar was taken as a basic assumption, with the sentence emerging as the primary unit in most psycholinguistic experiments during this period. Psycholinguistic studies in the 1960s tested whether the number and complexity of mental operations performed during processing was a function of the number and complexity of formal transformations seen in the grammatical derivation of that sentence, as postulated by linguists.
Because generative grammar was inherently interested in the nature of human language, there was also considerable interest in language acquisition as well as in linguistic universals. It was commonly held that the capacity for language acquisition is species-specific and is a genetically determined attribute of humans and humans alone.
The Cognitive Period questioned what the intrinsic capacity to learn language really means, and whether what is really brought to bear is a set of general learning principles. The major premise that underlies a cognitive approach is the dependence of language upon human cognition, the notion that language is but one of several outcomes of more fundamental cognitive processes. The centrality and independence of grammar was rejected, in favor of a view that the cognitive capacity described in grammatical accounts of competence is only one manifestation of human language, and is in no way prior to or independent of other cognitive and behavioral systems involved in the acquisition and use of language. Linguistic structures are not learned independently of semantic concepts and discourse functions, and more importantly, cognitive principles must be assumed to govern the acquisition of linguistic structures. Thus, although linguistic theory continued to play a role in psycholinguistic theory and practice, the role was not as directive as before.
Psychology in the 1970s also began to be disenchanted by linguistic theory, given its limited applicability to dealing with how we actually produce or comprehend language, and psychological investigations of language processing made less reference to linguistic theory. There was robust evidence for the role of surface structure in processing, but not for transformations. The Derivational Theory of Complexity, suggesting that the number and complexity of mental operations performed during processing was a function of the number and complexity of transformations, never received sufficient support to continue as a working hypothesis. Instead, much of the information gleaned from experimental results along the way was extremely informative about natural language processing, and showed that there was much more to be learned from psycholinguistic research than just this weak hypothesis.
The last and most current period in psycholinguistics is one matched by the development of Cognitive Science as an interdisciplinary activity. Psycholinguistics is now involved in a larger field of inquiry, that is, the nature of knowledge, the structure of mental representations, and how these are used in mental processes like reasoning and decision making. Current psycholinguistic theory also reflects a considerable theoretical variety in both psychology and linguistics, but there is nonetheless a tremendous amount of truly interdisciplinary activity. More than ever before, researchers are very much aware of developments in adjacent fields, exhibiting research goals and a breadth of knowledge not confined to a single discipline. Linguists and psychologists can no longer afford to ignore scientific answers in the other field which impinge on research problems in their own field and the explanations they offer for them.
The linguistic approach which one sees increasingly is one which takes information processing constraints into account. “Correctness” of a grammatical theory is no longer as vehemently argued, for grammatical theories can all be internally “correct”; it becomes more a question of compatibility of a system of grammatical description that is attuned to the problems, as well as the results, of psycholinguistic research. Language is now increasingly seen as a symbolic process, often leading to decisions based on knowledge, and not as the ultimate and only interesting knowledge set.
Baca juga:  Social Perspective of Women’s Language

Read: What is Psycholinguistic

In turn, psychologists are once again interested in the role of linguistic structures in language processing. Some claim that psycholinguistics now is more vibrant than it has been since the 1960s. The interaction of linguistic structure and language processing may be the focal topic of psycholinguistic research, but that interaction is now subject to the double, and equally important, rigors of linguistic analysis and psychological experimentation. Although psychology and linguistics are once again equal partners in the psycholinguistic enterprise, they do not always subscribe to same philosophy of science. One of the current questions is whether the language processing system is modular or interactive, and much recent research probes the degree of modularity or interaction in the system. Linguists generally have favored the modularity hypothesis, while psychologists have been more attracted to interactive explanations of language and learning principles. This is an exciting time for psycholinguistic research, with its potential for contributing to an exacting and realistic science of the human mind, a cognitive science.

Posting Terkait "A History Of Psycholinguistics"